She's made it all hers. Thank you for sharing, Bronny!
By LindaMc at 11:08 PM 1 Comments

My son-in-law's mother, who visited here with his sister in July, passed away late this morning. When the weather cooperates, she'll be buried in Maryland. Since the location is rural and the cost of Flying is out of the question, they'll drive. My job will be to spend varying odd hours for a week or more at DD's house by drive over and back 2 or 3 times a day to babysit her cat and 4 big rambunctious dogs.

I'd emailed Kathy at Stitch Niche asking if she'd be interested. "Absolutely!" I made up a suitable one-page chart format for each then took both "Hanging 30" and the "Halloween Biscornu" charts to my LNS owner who will copy then hand them out to interested customers as freebies starting next week. Kathy has encouraged me for several years to go professional and will buy some for her shop, and I've spent quite a bit of time looking into that. But the start up costs for new equipment and packaging vs the tiny amount of profit per sale were just too discouraging.  And I've yet to come up with a logo for Bits of Floss, though I can vaguely see something in my mind - more or less - it looks like a small pile of colorful orts, but so far I just haven't been able to convert that from synapses to digital form.
By LindaMc at 4:29 PM 3 Comments Labels: Cross Stitch, Family, freebie 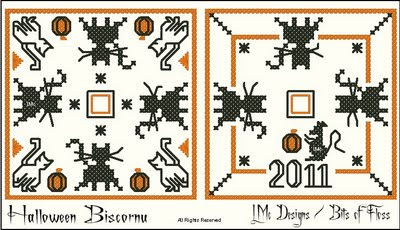 A/C breakdown #3 and an Afternoon With Dad

First, I've added some more freebie links over the past week. Lately, I've been doing that almost every day. Surely I'll soon run out of sources.

This time the capacitor and MORE FREON. : (  I'd actually scheduled to have the leaky coils replaced the end of June right after the last A/C emergency , but had to cancel when Mom went in the hospital then died a few days later. I just couldn't handle it then. I was rather hoping the freon would last the summer and I could consider the cost of repair vs. replacement under less stressful circumstances.Who knew we'd be having our second hottest summer on record? It was a record high of 107 both yesterday and today, and record high overnight lows of 85. I HATE SUMMER!

I got home from night at Dad's in time to tidy and vacuum but just as I started to shower, the A/C repairman came a knock-knock-knocking at my door without calling first. WHERE'S MY BRA??? Everything done in 10 or 15 minutes max. When I took out my checkbook figuring at least ANOTHER $200, he told me the owner had said not to ticket me. Huh? Ok, no service charge since they'd been out twice already, that's really nice since it'd been over 30 days, but how much are the other items? No. He'd been told to give the
a blank ticket to the owner. When I realized what he meant, I immediately started sobbing. Then blubbered a couple of moments, then couldn't even sign my name to a blank ticket. Historical note: My sister dated the owner back in high school in the 1960's. He was a sweetie then and still is today. I'll call Monday to say a heartfelt thank you, ask to be billed SOMETHING, then discuss what the heck to do now since new A/C units are NOT in my budget.

Called Dad to tell him what the verdict was and that I would be back later AFTER I had shower and bath, then settled in to read a book for a while and eventually went back over to move the load of clothes I'd washed last night to the dryer. Dad wanted to show me a picture on the computer. It was of Mom - one of his favorites. Thereafter, followed a couple of hours looking at photos he'd uploaded to the computer - mostly of Mom throughout the years, but of some others as well. The important thing was that we were talking about Mom. We've never really just sat down and just talked about Mom at length since she died. I'm sure each of us was trying not to upset the other, but we should have sooner. Every now and then one of us would tear up, but all in all it was a good thing - just remembering Mom.

Not Dad's favorite, but I don't remember even seeing this one before. Yep, me in the background.. Mom was beautiful and always looked 10 or 20 years younger than her actual years.

By LindaMc at 3:32 AM 2 Comments Labels: Family, Random thoughts

by the end of the year??  If you are interested in any of her many wonderful freebies, now is the time to visit. They are scattered through out the blog, so you have to go page by page. Gazette 94
By LindaMc at 12:47 PM 0 Comments Labels: Cross Stitch, freebie 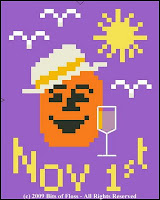 By LindaMc at 3:58 AM 0 Comments Labels: Cross Stitch, freebie

For Bronny and others I promised a Halloween Design last year.
Click on image, then "save as." 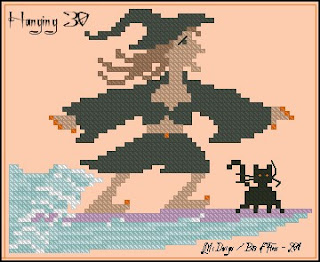 NOTE: After I converted the chart with key to a .jpg, I decided the cat looks better stitched 1 square to the right, as shown in the color picture. Your comments would be greatly appreciated 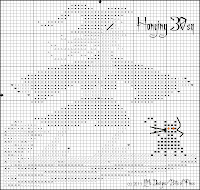 FRIDAY UPDATE: Never one to leave well-enough alone, this is an almost square version at 58x55 with the hanging 20 guy already shifted 1 square to the right.

Create a Personalized Emergency Plan for yourself, your family, your pets, etc. in a printed form you can carry with you, no matter where in the world you live. This handy online app was created under the auspices of Homeland Security.  Except for a couple of phone numbers, the final print-out will apply to any emergency world wide. Make sure everyone in your family has a copy and discuss and/or exchange with other family members Freely share this link with everyone you know.

Yesterday was another record high 107. HAVE I MENTIONED: I HATE SUMMER??? I spent part of yesterday and all last night drinking iced tea with the fan blowing directly on me from a distance of only 3 feet while reading Requiem at the Refuge  - a Sister Mary Helen Mystery. I've been reading a LOT lately. See my Book List.
By LindaMc at 5:45 AM 0 Comments Labels: Books

I'm probably unnecessarily reinventing the wheel because there are some great sites with freebie links, but it gives me an interesting challenge and so far my links all work. If you run across one that doesn't, please let me know!