This may be as "official" as it gets, so I am reposting my previous post about receiving this astonishing recognition! Here is a link to an article posted on the City of Arlington website.

I was and remain deeply humbled and incredibly honored that as a member of Arlington CERT (Community Emergency Response Team) to have been nominated by the Arlington Office of Emergency Management for this Award. I was absolutely stunned when I learned that I had been selected to receive the 2012 Jack Colley Citizen Corps Leadership Award for volunteerism (related to disaster preparedness and/or response) in the State of Texas. “This statewide recognition is the highest honor bestowed upon a council or volunteer by the state's Citizen Corps Council,” said Julie Martinez, Texas Citizen Corps manager. "This Award was established in honor of Jack Colley, who served as director of the Texas Division of Emergency Management for more than a decade before his death in 2010."

I was presented with a plaque in honor of Jack Colley, an official Flag of the State of Texas that had been flown over the State Capitol a few days before (with accompanying certificate that also has my name on it, albeit misspelled). My name will be added to a permanent plaque kept at the Texas Citizen Corps headquarters in Austin. 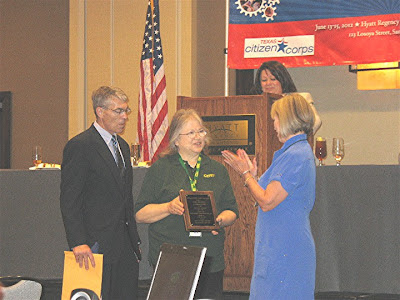 Receiving Award from Steve McCraw, Director of the Texas
Department  of Public Safety, and Penny Redington, Executive Director
of the Texas Association of Regional Councils. 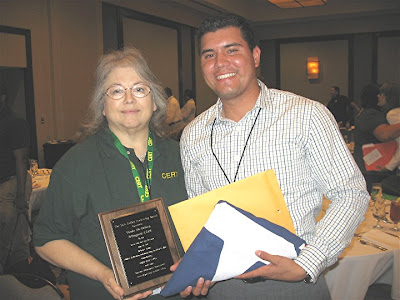 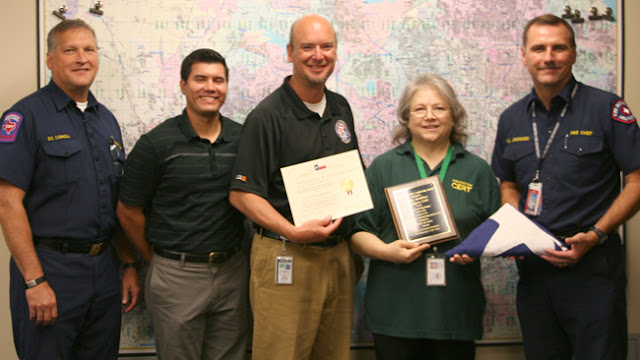 Linda McMillen, an Arlington Fire Department Community Emergency Response Team (CERT) volunteer, was awarded the second annual Jack Colley Award for Volunteerism last week in San Antonio. The prestigious Jack Colley Award honors an outstanding volunteer who exhibits leadership, dedication, self-sacrifice and service to the State of Texas in the field of emergency management, attributes personified by the late Texas Division of Emergency Management Chief Jack Colley. This state-wide recognition is the highest honor bestowed upon a volunteer by the state's Citizen Corps Program. The award was presented by the Director of the Texas Department of Public Safety, Steve McCraw, and Texas Association of Regional Councils Executive Director, Penny Redington, at the annual Texas Unites Citizen Corps/VOAD Conference on June 15.

The Jack Colley Leadership Award was established in honor of Jack Colley, Chief, Texas Division of Emergency Management, 1998 – 2010, for his unwavering support, dedication, and service to the citizens of Texas during times of crises; and for his outstanding leadership in the profession of emergency management. The award is given annually in his honor to recognize the outstanding leadership and service of a Citizen Corps volunteer.

Narrative from the award submission:

Since 2007, Ms. McMillen has been instrumental to the success of the Arlington CERT program and the Arlington Office of Emergency Management. Throughout her time with the CERT program Linda has participated in numerous trainings, exercises and emergency responses. Most recently, Linda was vital to the response following the April 3, 2012 EF-2 tornado that impacted the cities of Kennedale and Arlington. Her efforts organized the response of over 40 volunteers to support the Arlington Emergency Operations Center and the City’s Tornado Recovery Center. In total, Linda volunteered approximately 90 hours in a ten-day period to ensure a streamlined process of CERT volunteer management. Linda also regularly manages the ham radio net for Arlington’s monthly outdoor warning system test. Each month, Linda dedicates time to organize and assign volunteer radio operators to observe and report the status of the siren system. Additionally, Linda regularly responds to severe weather warnings and represents the Arlington EOC on the Tarrant County RACES radio net. Linda has been involved with major special event and natural disaster EOC activations which has included the NBA All-Star game, Super Bowl 45, Cotton Bowl, World Series, Tropical Storm Hermine and the April 2012 Tornado. Furthermore, Linda has participated in every major exercise sponsored by the City of Arlington which has included a full-scale exercise at the new Cowboy’s Stadium, a functional EOC exercise in preparation of Super Bowl 45 and numerous drills, tabletops and workshops in support of the Arlington Office of Emergency Management.

I remain totally overwhelmed and am still trying to wrap my mind around it. I truly did not expect this. Awards are not the reason I do volunteer work. I wanted to be active in the community and hopefully might add something productive and positive along the way. I have the time, and I get a great deal of personal satisfaction doing the things I get to do. I'm happy and gratified just to receive honest thank yous and the privilege of being allowed to continue to assist as I can. This .... this is overwhelming and I'm still trying to digest just how prestigious and just how high an honor it is.

My sincere and profound thank yous to the Texas Citizen Corps Council - their staff and representatives, the State of Texas Emergency Managment, Texas VOAD (Voluntary Organizations Active in Disasters), the City of Arlington Fire Department and the Office of Emergency Management for being so honored. Again, I am deeply humbled and incredibly honored to have received the 2012 Jack Colley Leadership Award.
By LindaMc at 9:00 PM 3 Comments 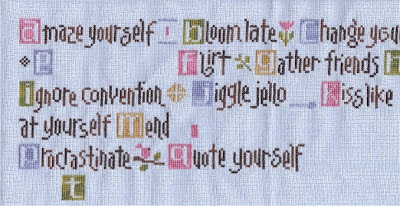 Part of my current project on 28ct Wedgewood Lugana. I've completed almost all of the first 3 lines.  "e" is charted for "eat chocolate." I'm allergic so I may substitute  "eat ice cream" if it will fit. I debated about fabric color and have decided I quite like the blue! The LNS owner advised I would need a full fat quarter. Nope. Just 1/2 that. Instead of wasting all that extra fabric, I'm utilizing a 2-1/4" allowance, which is more than enough for framing purposes. I would have preferred chart only, but it only comes as a kit with 4 skeins of CC Caterpillar, and 1 skein of each of the other colors (of which maybe 1/4 is actually used), plus some DMC white and an aqua. Except for the Caterpillar (which is a mix similar to 3371 with 898), I would have preferred to use same or similar CC's I already have on hand, and definitely didn't need the white or aqua. Still I liked it enough to buy.

PS:  Click here for some simple Patriotic and 4th of July designs and ideas!

As if I hadn't had to replace

computer and A/C in the last month, my 13-1/2 month old 4-In-1 Epson Workforce 520 printer jammed and flat quit working last week. This makes the 3rd printer in the last 5 years that has jammed to death. Thank goodness I had purchased a 2-year extended warranty on the Epson, even though that cost 1/3 the price of the printer but turned out to be about the same the cost as only 1 of the 2 required black ink cartridges - a pretty sore issue for MANY REASONS including the fact it used 3 or 4 times the amount of ink of any printer I have ever owned. And that despite the fact I printed almost exclusively in black draft mode and never in color. To be honest, while it had some nice features (all totally unrelated to printing), I despised the thing and am glad to be legitimately rid of it.

The first time I had had to replace BOTH black cartridges to the tune of about $40 (only $20 less than the initial cost of the printer including ink, and shockingly far too soon considering how little printing I actually do these days (none in color, and still those cartridges are all but empty) I started thinking about replacing the whole !#@!@## thing. But I hadn't gotten that far as I still had a smidge of ink left. Still I was on the verge of having to replace 2 blacks and 3 color cartridges to the tune of $90-$100. New printer, including ink - about $65.  Took Epson back to Frye's expecting Repair Dept to spend a couple of minutes removing tiny piece of still jammed paper I couldn't see at home. Instead they didn't even look at it and sent me back to Customer Service to have it replaced. Really? Long story short, I finally agreed to swap Epson for the Canon Pixma the warranty would approve of, however, IT would only come with a 30-day warranty - which I expressed considerable polite concern and polite consternation about. In the end, however, they replaced the Epson with the Canon and I paid $21 for a new 2-year extended warranty. I felt like I got a good deal, and I'm hoping when I get everything attached and plugged in it works. The  drive to Frye's is a real hassle.

I'm hoping I haven't been snookered on ink usage and cost yet again. It's utterly ludicrous and an environmental disgrace. Printers have fallen to amazingly low prices. The cost of ink, however, has skyrocketed. It's less expensive to toss the printer into a land fill and buy a new one than shell out thick wads of cash for a new round of ink!
By LindaMc at 4:30 PM 2 Comments