After far too many hours over 2 days I was FINALLY able to rechart a second impossible to read Santa with Flag chart. I'd gone on an internet hunt and found an image of one that had a similar look. Imagine my surprise when I saw the name of the book it came from, realized that SOMEWHERE I had it, finally found it then discovered new Santa with Flag was on the very same page as the one I recharted at least 10 years ago and just finished. As for recharting poorly chosen symbols that frequently looked alike, well, actually they are alike, just on different colored backgrounds, meaning on the dark simulated floss colors you can't even see them. I especially hated the full 1/3 of the color symbols that consisted of background color covered with teeeniney red or grey dots. You have no idea how hard it is to figure out which pink with dots is supposed to be which color, especially when charted right next to each other. It was all just too frustrating, and my eyes quit focusing a couple of days ago.

A long time ago I stitched a Santa with a similar look (must also have been from a Leisure Arts book or the same designer) on a heavy forest green sweatshirt  I only wear it to Christmas functions, but I've worn it to those for at least 20 years. I noticed this year it's developed little holes near one cuff.  I wore it anyway and hoped no one noticed.  I would LOVE to stitch another one but getting the needle through the waste canvas AND a heavy sweatshirt material killed my hands. It was all I could do to finish it then.  OTOH, despite all the washings in warm water the floss and colors have held up remarkably well. Wonder if there is a way to cut out the design and attach it to a new sweat shirt. Hmmmmm. 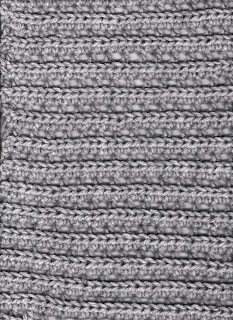 BTW, I gave up on knitting after only 2 weeks. Instead I grabbed a skein of bright yellow yarn (the pre-school great-nephew I made an afghan in primary colors for will graduate from high school this year) and a size J crochet hook to take with me to the Knitting and Spirituality group instead.  I did try to knit, just that my brain doesn't want to help me and it takes just too much concentration, and too long. One Sunday I made a complete bright yellow granny square in well under 10 minutes - since unraveled and rolled back into a ball.  Last Sunday I grabbed a skein of heathered "Mid Grey" and started playing with the idea of a prayer shawl. After a bit of hit or miss, I came up with this combination of half-double crochet stitches. The texture is created by going under only the back loop in one direction and the two top loops in the other. It's a really easy combination. (Click on the picture for a larger image.) I did start out trying to make a triangular shawl but sitting there in the Narthex couldn't get that tip to work out right, so this one is rectangular. Or, if I'd thought more before I started, I could have made it about 6" wider and it could have worked as a lap blanket, but alas not now.  I'm hoping it'll be long enough for a shawl. I'm already almost through the 2 skeins I had in that color and I doubt it's still available.That's an actual color scan, even if it looks like it's in black and white.
By LindaMc at 6:20 PM Labels: Crochet, Cross Stitch, Leisure Arts, Santas

Badly charted designs drive me nuts! Life is too short, and my stash is too big. lol!

I find crochet much more difficult than knitting, but I think we've all got our own strengths.